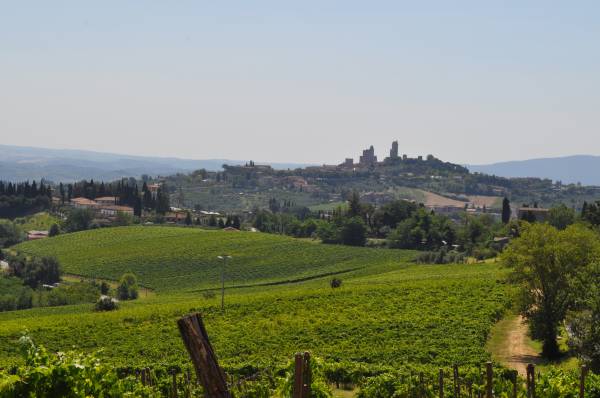 San Gimignano
Holiday in San Gimignano: picturesque medieval town which rises on a hill dominating the Elsa Valley, in the heart of a thriving rural area. Famous for its monuments and art treasures, it is one of Tuscany´s most famous tourist destinations. Main sights are Piazza della Cisterna, Piazza del Duomo, the Collegiata, with works by Benozzo Gozzoli and Del Pollaiolo, and Piazza del Popolo. San Gimignano is a medieval town renowned for its art, but its origins goes farther because it was founded by the Etruscans and had its period of highest splendour during the Middle Ages. San Gimignano´s historic centre is a UNESCO world heritage site and is mainly famous all over the world for its towers, originally more, and for its numerous architectural works, above all for its beautiful Romanesque Cathedral. The historic centre of San Gimignano includes hotels, restaurants, shops of typical Tuscan gourmet products, wine shops, handicraft shops and antique trades.
The town is also known for the white wine, among the most prestigious of Italy, the Vernaccia di San Gimignano, produced from grapes grown in the area since the 13th century. Another historically important product is saffron, valuable since the middle Ages for the economy of San Gimignano.